One’s first impression of Blenheim Palace at Oxfordshire is of the monumental size and antiquity. It is arguably most famous for being the birthplace of Sir Winston Churchill. Much is made of the ‘small’ room which greeted his early arrival. To those of us accustomed to a modest cottage, the size seems perfectly adequate. Great preparations had been made for a London gynaecologist and obstetrician, with suite of rooms at the ready. Winston had other ideas. The Duchess was attended by the local doctor. 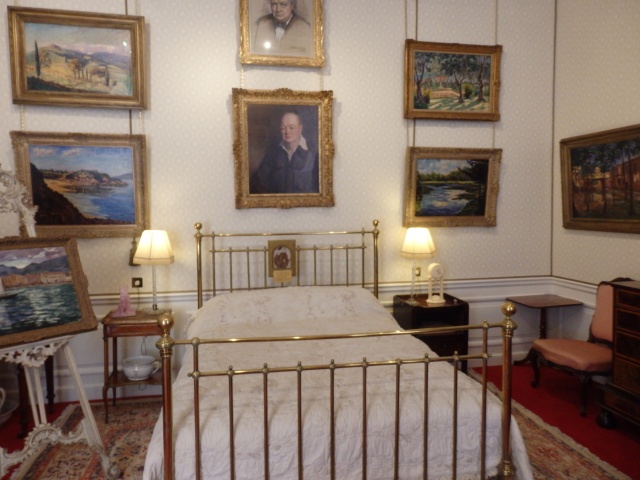 The room where Winston Churchill made his early arrival

The land on which the house is built had been gifted to the 1st Duke after his military triumphs against the French and Bavarians in the Spanish War of Succession in 1704. The story of its design and construction includes a Royal Grant of 240,000 pounds fromQueen Anne, an enormous sum in those days.

The Battle of Blenheim 1704

The Duchess was less than impressed by her husband’s choice of architect, Sir J Vanbrugh, and seems to have opposed his ideas at every turn. The building opened in 1722, and remains the principal residence of the Dukes of Marlborough.

A spendthrift 5th Duke began the decline in family fortunes, selling family estates. Luckily, Blenheim itself was entailed. The sale of valuable paintings by subsequent Dukes failed to stop the decline .By the 19th Century, Blenheim faced ruin. In the noble society of the day, it was unthinkable for a gentleman to work, but a sham marriage was quite acceptable. The 9th   Duke took the only action possible : he carried out negotiations with the parents of an American railway heiress, Consuelo Vanderbilt. Consuelo proved  to be an unwilling bride, but her mother fancied seeing her daughter a Duchess. Locked in her room, she eventually agreed to the match. Terms included cash-in-hand and a generous yearly income. The young couple were in a carriage driving away from the ceremony, when the Duke confessed his  love for another woman… They managed to produce an heir, subsequently divorcing. In a gold thimble, Consuelo’s wealth preserved not only the fabric of the building but enabled replacement of paintings and other treasures sold to keep the estate afloat. Ostentatious tapestries, sculptures, paintings books and artifacts match the style of this grand Baroque building. It’s well worth seeing. Some say at least 100,000 visitors enjoy  this palace and garden each year.

Visitors enjoy paintings, and family photographs which bring a family dimension to this grand room

I've reached the age of flamboyance and bling.I love Classical FM, Jazz, French chansons, French movies, SBS Documentaries and Wednesdays with my Women Writers Critique Group at the NSW Writers Centre.I've published short stories and the occasional article. My novel/'faction on nursing in the 20th Century,' BLACK STOCKINGS WHITE VEIL - A TALE OF ADVERSITY, TRIUMPH AND ROMANCE AT ROYAL PRINCE ALFRED HOSPITAL'- was a Finalist in the 2009 Indie Book Awards. I've critiqued a second fictional family memoir, 'SONGS FROM HEAVEN', and am working through a third, 'GOING HOME'.
View all posts by wraxdec →
This entry was posted in archicture, artist, Duchess, family, garden, grandeur, history, Uncategorized. Bookmark the permalink.